On Saturday, November 14, 2020, at approximately 6:30 pm, officers from the Manchester Township Police Department responded to the intersection of State Highway 37 and Commonwealth Boulevard to investigate a motor vehicle crash involving a vehicle and an ATV. 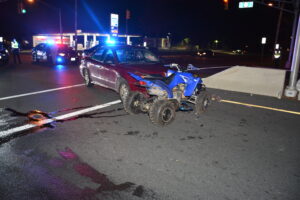 Upon arrival, officers observed a red, 2004, Pontiac Grand Am and a blue, Yamaha Raptor 350 ATV in the eastbound lanes of State Highway 37. The Pontiac had front-end damage and the ATV had damage to its front and right side. The investigation revealed that the Pontiac was making a left turn onto Route 37 from Commonwealth Boulevard, when the ATV entered Route 37 from the wooded area adjacent to the southern shoulder. In doing so, the ATV entered into the Pontiac’s lane of travel, at which time, the two vehicles collided. The driver of the Pontiac, 39-year-old, Timothy Riggs, and his 37-year-old front seat passenger, Tonya Smith, both of Toms River, were wearing their seatbelts at the time of the collision and were uninjured. The operator of the ATV, identified as 18-year-old, Tyler Moran of Toms River, was wearing a helmet at the time of the collision. Mr. Moran sustained a severe injury to his left leg and was transported to Community Medical Center in Toms River. 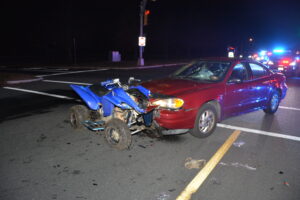 Assisting at the scene were EMTs from the Manchester Township Division of Emergency Services, as well as paramedics from Robert Wood Johnson University Hospital. The crash caused delays on State Highway 37 while officers conducted the investigation. This crash is being investigated by Patrolman Michael O’Hara of the department’s Traffic Safety Unit.