On Tuesday, May 11, 2021 at approximately 2:44 pm, officers from the Manchester Township Police Department responded to the area of County Route 530 and Fox Street in the Whiting Section of the township, to investigate a motor vehicle crash involving a motorcycle.
Upon arrival, officers observed a 1998, Honda Valkyrie motorcycle lying on County Route 530 with extensive damage. The rider, identified as 64-year-old, Terrence Lee of Whiting, was found lying on the pavement in the westbound, left turn only lane, approximately 15 feet from the motorcycle. Lee, who was wearing a DOT approved helmet, was alert and conscious but sustained substantial injuries. As a result, he was transported, via medevac helicopter, to Jersey Shore University Medical Center in Neptune for treatment and evaluation where he is listed in critical condition. 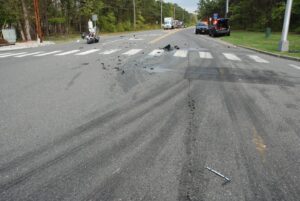 The investigation revealed that Lee was traveling eastbound on County Route 530 when a white, 2015, Nissan Sentra attempted to enter onto County Route 530 from Pine Ridge Blvd., crashing into the motorcycle. The impact caused the motorcycle to rotate approximately 180 degrees, throwing Lee from the motorcycle. The Nissan, which was being operated by 89-year-old, Joseph Orlando of Whiting, left the scene after impact. Orlando immediately contacted 911 upon arriving at his home and was later transported to Community Medical Center for treatment and evaluation for respiratory distress resulting from the incident. The Nissan was observed to have heavy front end damage.
County Route 530, in the area of the collision, was closed in both directions while officers conducted the investigation.
Assisting at the scene were EMTs from the Manchester Township Division of Emergency Services, as well as paramedics from Robert Wood Johnson University Hospital. The investigation into the crash is still ongoing, but at this point, driver error appears to be the primary contributing factor. This crash is being investigated by Patrolman Michael O’Hara of the department’s Traffic Safety section.
The Manchester Township Police Department would like to remind all road users that May is Motorcycle Safety Awareness Month and to look twice before entering a roadway or intersection.
By MPD|2021-05-18T15:50:09+00:00May 12th, 2021|Manchester Police News|Comments Off on Vehicle Collides with Motorcycle, Rider Airlifted to Trauma Center