The Manchester Township Police Department is pleased to welcome Sage Sysol to his new role as a Patrolman, five months after joining the department as a Special Law Enforcement Officer II. He was sworn in by Mayor Kenneth T. Palmer on May 11, 2021, in front of a limited group of family and police personnel. 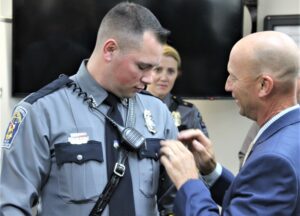 Ptl. Sysol graduated from Pinelands Regional High School in 2015. He earned an Associate’s Degree from the Ocean County College and is working toward his Bachelor’s Degree through Kean University. Ptl. Sysol worked as a SLEO I in Seaside Heights and SLEO II in Little Egg Harbor Township before being hired by the Manchester Township Police Department.
Following his hiring as a SLEO II this past January, Ptl. Sysol completed the Manchester Township Police Department’s intensive twelve week Field Training and Evaluation Program, during which time he was instructed and mentored by several highly trained and seasoned officers. He has since been assigned to the Patrol Bureau.
“Ptl. Sysol comes from a proud law enforcement family, which includes his father, uncle, aunt and brother,” said Chief Lisa Parker. “He values that legacy of public service and helping others, which makes him an ideal addition to our department.” 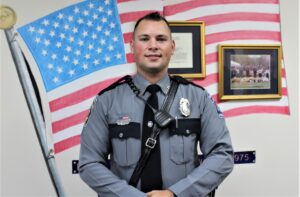 The intensive Manchester Township Police Department hiring process began in June of 2019, when approximately 125 individuals submitted their applications for employment. For the first phase, applicants participated in the Physical Agility Examination held at Manchester Township High School. This grueling test consisted of pull-ups, push-ups, sit-ups, and a 1 mile run. Those applicants who achieved a passing score advanced to the boxing component. The approximately 70 applicants who completed all portions of the physical exam were invited to participate in the Written Examination phase. From there, the top scorers went before the Oral Board for extensive interviews. Those candidates considered for employment underwent a thorough background investigation and submitted to medical, psychological, and drug screenings.
“We wish Ptl. Sysol all the best as he begins the next chapter of his law enforcement career here in Manchester Township,” said Chief Parker.
By MPD|2021-05-18T15:46:26+00:00May 12th, 2021|Manchester Police News|Comments Off on SLEO II Takes Oath as Manchester Township Police Patrolman