Upon arrival, officers observed a 2013, Hyundai Santa Fe with heavy front end damage resting against a Bellhaven Court residence, as well as, extensive damage to the southwest corner of the structure.  The initial investigation revealed that the Hyundai was stopped at the stop sign located at the intersection of Myrtle Place and Schoolhouse Road.  At that time the operator of the Hyundai, identified as Patricia Roberts, 73-year-old of Forked River, NJ, suffered a possible medical episode causing her to inadvertently step on the accelerator causing the vehicle to travel across Schoolhouse Road.  The Hyundai then proceeded to travel between two residences, where it impacted landscape bushes, a gutter, and part of an aluminum awning.  The Hyundai then crossed Bellhaven Court where it subsequently impacted the southwest corner of a residence. 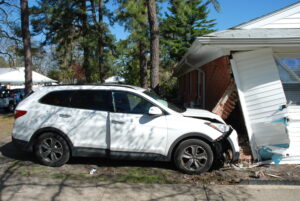 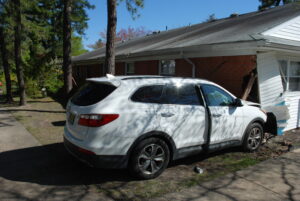 The investigation into the crash is still ongoing, but at this point, the possible medical episode suffered by Roberts appears to be the main contributing factor.  Assisting at the scene were EMTs from Manchester Township Emergency Services, as well as, paramedics from Robert Wood Johnson University Hospital.  Also assisting were members of the Whiting Volunteer Fire Department, members of the Joint Base Fire Department, and the Manchester Township Building Inspector.  This crash is being investigated by Patrolman Michael O’Hara of the department’s Traffic Safety section.