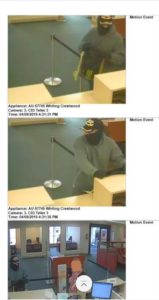 On Tuesday, April 9, 2019, at approximately 4:35 pm hours, the Manchester Township Police Department received a hold-up alarm from the Wells Fargo Bank located at 501 Route 530 in the Whiting section of the Township. While en route to the bank, responding officers learned that a male subject had entered the establishment, demanded money, and after receiving an undisclosed amount of cash, fled the bank on foot. The officers were told that no weapon was displayed and that no force was used by the suspect during the robbery. Numerous officers, who immediately responded to the area, cordoned off the bank and ensured that everyone was safe inside. A search of the area was immediately begun, and included searches using police K-9s as well as the department’s drone. These searches were unsuccessful in locating the suspect.

The suspect was described as a white male, approximately 6’ tall, with an average build. He was said to be wearing a black mask, black gloves, sunglasses, a black baseball cap and a dark colored sweatshirt.

It is requested that those who live in the area of the bank review their home surveillance systems between 4:00 PM and 5:00 PM to see if they may have captured the suspect passing by their property.  Additionally, the Manchester Township Police Department is requesting that anyone with information regarding this robbery contact the department at 732-657-6111. Those who wish to report information anonymously may do so through our tip line located on our web page at http://manchesterpolicenj.com/investigations-bureau/tip-line 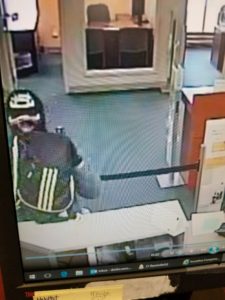