On Wednesday, March 2, 2016, officers from the Manchester Township Police responded to the Pine Lake section of Manchester Township for the report of a robbery involving a Manchester Middle School student and an unidentified white male. Upon arrival, the 14 year old victim reported to the officers that he was approached by an unknown male suspect while waiting for the school bus. The juvenile student, who was alone at the time of the incident, told officers that he was at his bus stop in the area of Cumberland Boulevard when a white male suspect approached him on a bicycle and asked to use his cell phone. The student obliged after which the suspect told him that he was going to take the cell phone and that if he had a problem with it, that he was going to get punched in the face. The victim offered no resistance and the suspect rode away on what was described as a purple colored mountain bike. 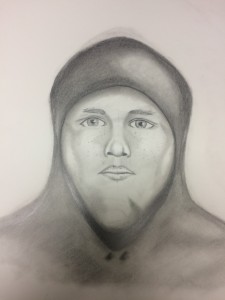 A short time later, a second incident, which was not immediately reported, took place at a bus stop located in the area of Middlesex Street. During the second incident, a middle school student was similarly approached by a white male who matched the same description as the suspect in the first incident. Like the first incident, the male suspect asked the student to use his cell phone. When the student declined, the suspect struck him several times with a closed fist. After doing so, the suspect road away on what was described as a purple colored mountain bike similar to what was described in first incident. The second student was uninjured and did not report the incident until he arrived at school. 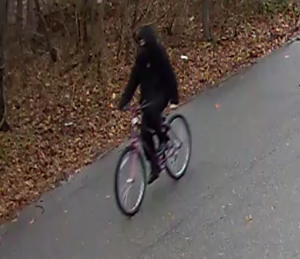 The suspect in these two incidents is described as a white male, between the ages of 18 and 23 years of age, approximately 5’10” tall, who weighs between 140 to 150 lbs. The suspect was described as having green eyes, a pale skin tone, black hair, and black marks on the left side of his face. He was said to be wearing a black hooded sweatshirt pulled over his head, a bandana over his face, black “pajama” style pants with a red stripe and black shoes. An actual photograph of the suspect was captured from nearby video surveillance.

The Manchester Township Police is requesting that you please review the photograph of the suspect. Anyone having any information regarding this incident is urged to contact the Manchester Township Police Dispatch immediately at 732-657-6111 or Detective Adam Emmons at 732-657-2009, ext. 4203. Anonymous tips can be submitted online at www.manchesterpolicenj.com. Tips may also be submitted through private Facebook message. Any help from the public is greatly appreciated.