Manchester Township Police joined with other law enforcement agencies from throughout Ocean County on Friday, May 20, to honor those who made the ultimate sacrifice while serving in the line of duty at the 25th Annual Law Enforcement Memorial Day Observance. 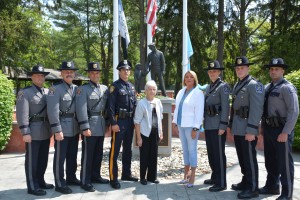 Last year, Cpl. Scott R. Thompson was honored at the event, with his name added to the Ocean County Honor Roll monument at the Ocean County Police Academy. His name joined others who gave their lives for their communities, including Manchester Township Police Ptl. Robert T. Tobias who was struck and killed along Route 70 on May 17, 1975, at just 23 years old. 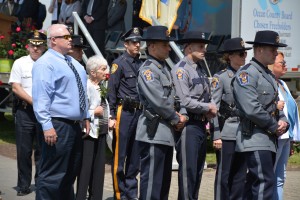 During the 41 years since his passing, Mrs. Eleanor Tobias has been active in honoring not only her son, but all officers who gave their lives. Mrs. Tobias continues to attend countless Manchester Township Police events, as well as other local and national ceremonies honoring law enforcement. Most recently, she joined the Manchester Police Unity Tour riders in Washington DC for a memorial she called “unbelievable.”

“As long as I have my health, I’ll keep attending these ceremonies. It’s out of respect to my son,” said Mrs. Tobias. “He was a special person who always wanted to be a police officer. It’s just what he wanted to do. He was very proud and loved his work.”

That pride in Ptl. Tobias’ work was evident from his time as a student, through his career as a police officer. Mrs. Tobias said that his teachers praised him, saying that he was a thoughtful student who was a “pleasure to have in the classroom.” Once he earned his police officer job, that pride continued to show. Ptl. Tobias, whose father was an officer in Toms River, was “meticulous” in keeping his uniform in pristine condition and representing himself and Manchester Township well. 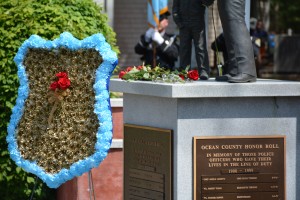 The bonds of the law enforcement community are unbreakable, and Ptl. Tobias, along with Cpl. Thompson, are remembered by their brothers in the Manchester Township Police Department each day. Likewise, Mrs. Tobias still keeps remembrances of her son, including his police uniforms and a 1973 green Corvette — Robert’s dream car. She also keeps in regular contact with Robert’s fellow officers and is known as “Mom” Tobias by members of the Manchester Township Police. 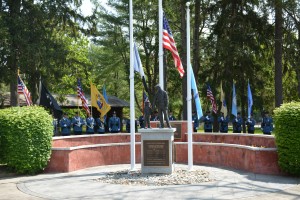 “All of the officers should be honored, and it’s great to see that they are honored,” Mrs. Tobias said. “I respect them all to no end. Being a police officer is not an easy job.”