The Manchester Township Police Department is pleased to welcome its newest Patrolmen, Conner Yatauro and Keith Douglas. Mayor Kenneth T. Palmer administered their oaths during a ceremony in the Municipal Complex Civic Center on May 31 in front of family, friends, and police personnel including Chief Lisa Parker. 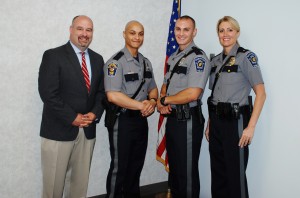 Taking his oath first was Conner Yatauro, who has been a Manchester Township resident for 23 years. He graduated from Monsignor Donovan High School in 2010, where he played varsity lacrosse and soccer and was named an All-American by U.S. Lacrosse. Ptl. Yatauro then attended the University of Hartford and graduated with an accounting degree. He pursued a law enforcement career and was hired as a seasonal Officer with the Point Pleasant Beach Police Department in December 2015. Ptl. Yatauro graduated from the Ocean County Police Academy, SLEO Class 39.

The hiring process began in January, when more than 230 applicants participated in the Physical Agility Examination held at Manchester Township High School. This test consisted of pull-ups, push-ups, sit-ups, squat thrusts, and a 1 mile run. Those applicants who achieved a passing score advanced to the boxing component of the testing process. Approximately half of the applicants completed all phases of the physical exam successfully and advanced to the written examination phase in February. From there, the top scorers went before the Oral Board for extensive interviews. The top candidates underwent a thorough background investigation and passed medical, psychological, and drug screenings.

“This hiring process is one of the best and most extensive in the State of New Jersey. Our goal is to select the absolute best Officers, upstanding individuals who will proudly serve our Department and the community,” said Chief Parker.

Patrolmen Yatauro and Douglas now will begin the Manchester Township Police Department’s intensive twelve week Field Training and Evaluation Program, during which time they will be instructed and mentored by several highly trained and seasoned officers. Upon successful completion of the Field Training Program, these Patrolmen will be assigned to a patrol squad. We wish them both success as they begin their law enforcement career serving Manchester Township and its residents.

“We could do none of this without the support of Mayor Palmer and the Township Council. It is with their support that all of this is possible, and I say this with sincerity and appreciation for their ongoing support,” said Chief Parker.