The driver of a dump truck that struck a utility pole Wednesday morning, causing live electrical wires to fall on his vehicle, escaped without injury after a nearby Manchester Township Police officer provided emergency instruction through his vehicle’s public address system. 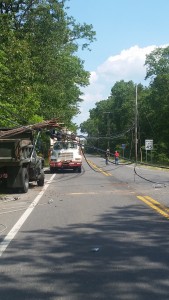 At about 8:45 a.m., Ptl. Rich Chevrier was driving northbound on Route 539 and was about 500 feet from a Lakehurst Public Works dump truck, which was traveling southbound, when he noticed sparks as it left the roadway and struck a utility pole. Ptl. Chevrier immediately stopped his patrol vehicle and used his public address system to instruct the driver of the dump truck to remain inside of his vehicle, as contact with fallen live wires could be fatal. The driver complied and waited for a nearby JCP&L crew to arrive and cut power before safely exiting the vehicle. 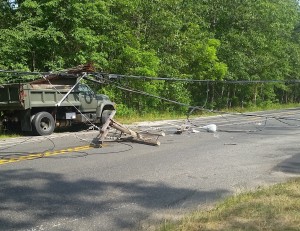 The driver of the dump truck, Jason Emme, 25, of Bayville, was not injured in the crash. Mr. Emme advised investigating officers that a red SUV had made an unsafe left turn from Cherry Street on to Route 539 southbound causing him to brake and swerve to avoid a collision. These evasive actions caused him to leave the roadway and strike the utility pole. The driver of the SUV, which is believed to be a red Jeep Cherokee or Liberty, did not stop following the crash. Police ask that anyone who may have information regarding this vehicle to please call 732-657-6111. A photo of the vehicle is attached. 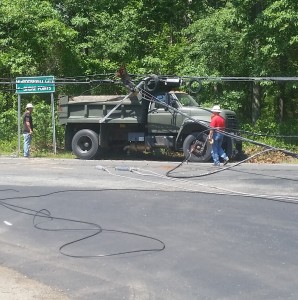 “The quick thinking of Ptl. Chevrier to use his vehicle’s PA system to warn Mr. Emme to stay inside of his truck was lifesaving,” said Sgt. Charles Brooks. “Residents are reminded to always avoid downed wires, as they could be electrified and extremely dangerous. Alert authorities and never attempt to touch, move, or drive over any wires.” 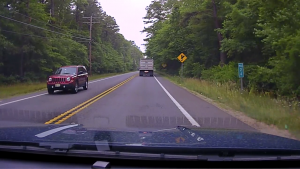 Electrical service to some residents in the Whiting section of Manchester Township was disrupted because of the crash. The section of Route 539 remains closed as repairs are made to the utility pole by JCP&L. Also assisting at the scene were members of the Whiting Volunteer Fire Company and Quality Medical Transport.