On Tuesday, March 10, 2015, Manchester Township Police patrol units responded to the area of State Highway 37 and Commonwealth Boulevard for the report of a multi-vehicle motor vehicle accident. 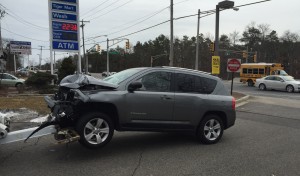 Shortly after arrival, it was learned that James F. Hilberg, age 69, of Whiting, was operating his 2011 Jeep westbound on State Highway 37 when he struck the rear of a 2009 Honda, operated by Katherine Marciano, age 90, of Manchester. After impact, Hilberg’s vehicle continued to travel westbound where it struck a 2009 Subaru, operated by Frank Sardoni, age 78, also of Manchester, and a 2013 Commercial dump truck operated by Richard Bonilla, age 30, of Farmingdale. Hilberg’s vehicle came to a stop after it crossed into the eastbound lane of travel at the intersection of State Highway 37 and Commonwealth Boulevard and struck a 2005 Hyundai head on. The Hyundai was being operated by Christopher Butler, age 28, of Manchester. 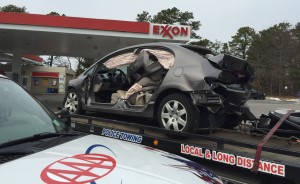 Other vehicles involved in the crash were a 2012 Nissan operated by Jayson Hodges, age 44, of Whiting and a 2014 Honda operated by Juanito Canete, age 72, of Manchester. Hodges’ vehicle was struck in the rear by Marciano’s vehicle during the initial impact by Hilberg’s vehicle and after doing so, struck the rear of Canete’s vehicle. 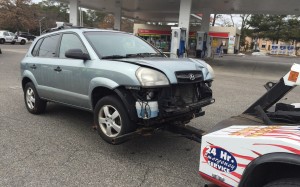 All operators and passengers involved reported to be wearing their seatbelts at the time of the crash. This crash is under investigation by Patrolman A. Ellis of the Manchester Police Traffic Safety Section.