A Chelsea Drive home in Crestwood Village 7 was deemed uninhabitable after emergency responders extinguished a fire at the residence on Monday, March 23, 2015.

Authorities responded to 12 Chelsea Drive for the report of a residential structure fire Monday morning. Manchester Township Police Patrolman Vincent DeRome was the first to arrive on scene and noticed flames coming from the roof after a neighbor called police at 6:21 a.m. 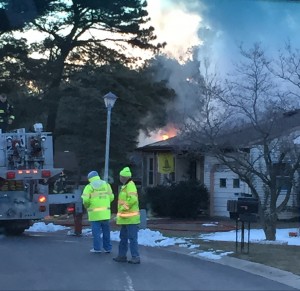 Fire companies from Whiting, Manchester, Ridgeway, Lakehurst, Joint Base McGuire-Dix-Lakehurst, Pinewald, and Bamber Lakes responded and extinguished the blaze. The homeowner and lone occupant, Alan Palm, was not home at the time of the fire and was not injured, though household pets perished as a result of the blaze.

The exact cause of the fire has not yet been determined, though it appears to be accidental in nature. It remains under investigation by Ocean County Deputy Fire Marshall Mike Wolfschmidt. Manchester Township Building Inspector Nicole Ashkar determined that the residence was uninhabitable. The Red Cross responded and provided Mr. Palm with temporary housing. 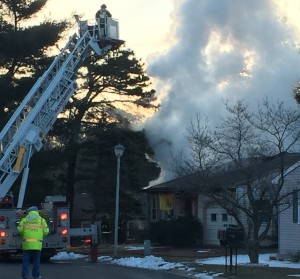 During the investigation, an inert mortar round was found inside the home, requiring officers from the New Jersey State Police Bomb Squad and Hazmat Units to respond. They determined that the item did not pose a threat to public safety. The Ocean County Sheriff’s Office K-9 accelerant dog also responded to the scene and found no evidence of explosive or incendiary material.