Manchester Township Police Chief Lisa Parker today recognized the outstanding efforts of two Manchester Township officers and family members of a distraught man with preventing a tragedy. On Saturday, October 8, 2016,at approximately 11 p.m., officers responded to a New York Avenue residence in reference a 911 call involving an intoxicated male. Responding officers had no idea the 25-year-old resident was looking to force a deadly encounter with police.

When Officer Patrick Mabie arrived, he observed a struggle between several people in the driveway of the home. As Officer Mabie approached the home to determine what the dispute in the driveway was, a male began walking towards him yelling. The man yelled to the officer “just kill me,” “I can’t stand my life.” Officer Mabie quickly assessed through the rain and dark night that the man was unarmed. Officer Mabie and a second officer, Officer Michael Steffen, struggled to bring the distraught man under control. After a brief scuffle, during which time the man repeatedly shouted “shoot me, shoot me,” they were able to take him safely into custody.

Officers later determined that the struggle in the driveway initially observed by Officer Mabie involved family members of the distraught man who were attempting to get a pellet gun, which closely resembled a real handgun, out of his hand. Officers learned that prior to the 25-year-old man calling 911, he called family members to say he was going to commit “suicide by cop.” As a result, several family members rushed to the residence and arrived just prior to officers. 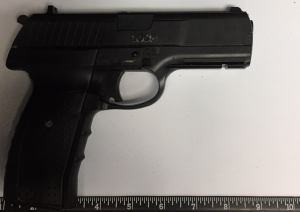 Chief Parker said, “This near tragedy was avoided through quick actions of family members and officers. Family members were able to get the pellet gun out of the man’s hand and officers were able to quickly assess the chaotic scene and take appropriate action. Officers showed great restraint and safely took him into custody without further incident.”

The man was taken to an area hospital for further mental health evaluation.

The Manchester Township Police Department has seen a marked increase in calls involving emotionally disturbed persons. A review of the agency’s Computer Aided Dispatch records reveals an almost 30 percent increase in these types of calls between 2012 and 2015.

Chief Parker said: “This case just highlights how even the most seemingly basic of calls can quickly change. I am proud of the officers and thankful for the family members who intervened.”