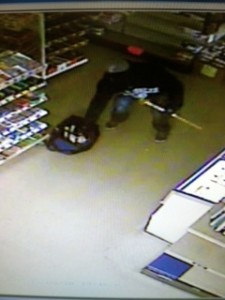 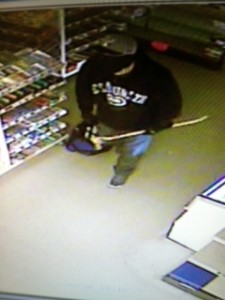 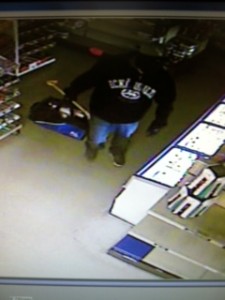 On September 28, 2013, at approximately 2:49am Manchester Township Police responded to the Country Farms, located at 550 County Route 530 Whiting, NJ for a report of a burglary in progress.  At approximately 2:32am the suspect gained access to the Country Farms by smashing the glass front door using a large crowbar.  The suspect entered the store carrying a navy blue duffle bag.  Through the use of video surveillance cameras, the suspect was observed walking behind the front counter and stealing a large quantity of cigarettes.  The suspect is described as a white male, approximately 6′ in height, wearing blue jeans and a black hooded sweat shirt with a light colored Ecko Unlimtied logo on the front.  Approximately three minutes later, a Melone Brothers Bread Truck arrived in front of the store to delivery bread.  The delivery men stated that while they were dropping off the Country Farms bread order, they observed the damage to the front door of the Country Farms and glass all over the sidewalk.  The deliverymen immediately contacted 9-1-1, at which time they observed the aforementioned suspect run out of the store and around the building.  The delivery men stated they gave chase to the suspect before he entered into a midsized sedan vehicle that was parked with all of the lights off in the rear of the building with another suspect in the driver’s seat.  The vehicle was described as a two door dark gray or brown Infiniti.  The vehicle possibly had tinted windows.  The delivery men stated that the suspect vehicle drove off at a high rate of speed with the headlights turned off until it turned onto County Route 530 East towards Berkeley Township.  Assisting in the investigation was the Manchester Township Investigations Bureau and the Ocean County Sheriff’s Department Criminal Investigation Unit.

Anyone with information regarding the identity of the above suspect  can call Manchester Township Police at 732-657-6111.