At approximately 7:15 a.m. on June 9, 2015, Manchester Township Police officers responded to the report of a motor vehicle accident at the intersection of Route 37 and Colonial Drive. Once on scene, it was determined that the crash, which occurred in the right-hand lane of Route 37 eastbound, involved two vehicles, a 2009 Freightliner tractor trailer and a 2004 Toyota Sienna minivan. 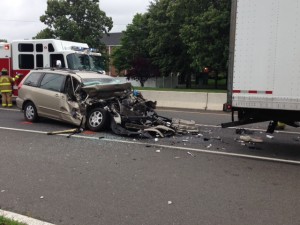 Preliminary investigation revealed that the collision occurred when the Toyota Sienna, which was being operated by Robert Young, age 54, of New Egypt, crashed with the rear of the tractor trailer which was stopped at the traffic signal. The operator of the tractor trailer, Steven Taylor, age 46, of Somerset, was treated at the scene by Manchester First Aid and Paramedics from MONOC for the complaint of back and neck pain, but refused further medical treatment.

Mr. Young, who needed to be extricated from his vehicle, was airlifted to Jersey Shore Medical Center by MONOC helicopter for further treatment of his injuries. His condition is not immediately known. He was wearing his seatbelt at the time of the crash.