On Saturday, Sept. 6, 2014, at approximately 2:24 p.m., a two-vehicle crash occurred at the intersection of Commonwealth and Northampton Boulevard in the Pine Lake Park section of Manchester Township. 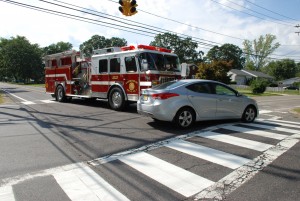 A Manchester Volunteer Fire Company engine was traveling east on Commonwealth Boulevard in response to an emergency call with emergency lights activated. The fire engine was carrying four volunteer firefighters aboard when the driver, 45 year old Dale Herbert, braked and swerved to avoid a vehicle that had pulled out onto Commonwealth from Northampton Boulevard.

The crash occurred within the intersection and the Hyundai was struck on the driver’s side. That vehicle sustained damage and was towed from the scene.

No patients required hospitalization as a result of the crash. The driver of the Hyundai, Ms. Olson, refused medical attention, but complained of hand pain.