On Wednesday, May 13, at approximately 3:06 p.m., members of the Manchester Township Police responded to the report of a structure fire at 501 A Lilac Lane in the Whiting section of town.  Upon arrival, officers reported that one of the units of the attached duplex was fully involved and reported observing flames protruding from the left side of the residence. 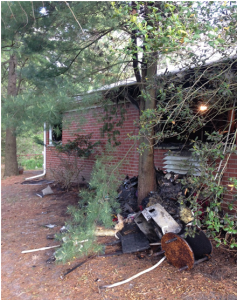 Responding officers confirmed that Unit A was unoccupied and assisted in evacuating the adjoining unit which was threatened by the fire. Fire Departments from Whiting, Manchester, Lakehurst Boro, the NJ State Forest Fire Service and Joint Base McGuire-Dix-Lakehurst responded and extinguished the fire. Quality Medical Transport responded to the scene and treated the homeowners from both units for precautionary reasons; however, no one was transported to the hospital.