On Monday, May 16, 2016, at approximately 4:15 p.m., officers from the Manchester Township Police Department, along with several local fire companies, responded to the report of a structure fire inside of a mobile home on Walden Way in the Pine Ridge section of Manchester Township.

Upon arrival, officers reported that the residence was engulfed in flames and that the home was unoccupied. While firefighters were extinguishing the blaze, the 58 year old resident of the mobile home told investigators that she was cooking oil on the stove when she became distracted for a short period of time. Upon returning to the kitchen, she reported that the fire had spread beyond her ability to put it out with a fire extinguisher. The fire was extinguished by members of the Whiting, Manchester, Ridgeway and Lakehurst Volunteer Fire Companies. The Manchester Township Building Inspector deemed the mobile home uninhabitable and the homeowner was relocated to her daughter’s residence in Bayville. 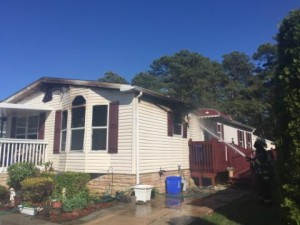 Although the fire is not considered suspicious in nature, the exact cause and origin is being investigated by Detective Adam Emmons of the Manchester Township Police Department’s Investigations Bureau with the assistance of the Ocean County Fire Marshal’s Office.

The Manchester Township Police would like to remind residents to check their smoke detector batteries at least two times per year and to never leave food unattended while cooking.