The ambulance was occupied by three volunteer squad members that were en route to an emergency call with its lights and siren activated when it was struck by a large box truck that was traveling east on County Route 530. 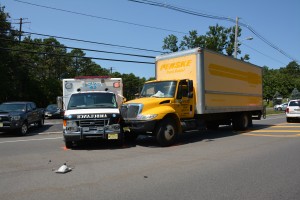 The ambulance was being operated by Albert Stover, 80, of Whiting. The crew members that were passengers in the ambulance were  Bryan Platt, 56, of New Egypt and John Valdora, 73, of Whiting.

The box truck is registered to Optimum Moving LLC out of Elmwood Park, NJ. It was being operated by David Pinuel, 20, from Fairlawn, NJ.

This crash is under investigation by Patrolman Antonio Ellis of the Manchester Township Police Traffic Safety Section.