Five Injured in Five Car Crash on Route 70 in Manchester

Five Injured in Five Car Crash on Route 70 in Manchester

A five-vehicle chain-reaction crash on Friday morning, November 4, 2016, snarled traffic on Route 70 near the intersection of Green Acres Road, in the eastern section of the township.

At approximately 11:17 a.m., officers from the Manchester Township Police Department responded to the intersection of State Highway 70 and Green Acres Road for the report of a multi-vehicle chain reaction crash involving five vehicles. Upon arrival, officers learned that 22 year-old, Brienna Hubbs, of Forked River was operating a 2015, Ford Fleet Wagon, owned by The Regency Memory Care Club of Toms River, westbound on Route 70, when she struck the rear of a 2016 Chevy Impala, being operated by 84-year-old, Joseph Giammarino, of Toms River, which was stopped in traffic for a red light. 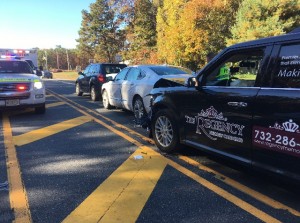 The impact began a chain reaction crash that pushed his vehicle into the rear of a 2016 Chevy Equinox being operated by Robert Vaughn of Toms River. His vehicle was then pushed into the rear of a 2016, Toyota Corolla being operated by, 19-year-old, Jovie Bandoy. Her vehicle was then pushed into the rear of a 1998, Jeep being operated by Kathleen Carpenter. Four passengers from the Ford Fleet wagon; 91-year-old, Irene DiGenno, 73-year-old, Kenneth Zaentz, 87-year-old, Geraldine Rinaldi and 80-year-old Patricia Hazard were transported to Community Medical Center in Toms River for treatment of minor injuries. Additionally, Joseph Giammarino was transported to Kimball Medical Center in Lakewood for minor injuries sustained in the crash. The remaining four drivers and their three passengers refused medical treatment at the scene. 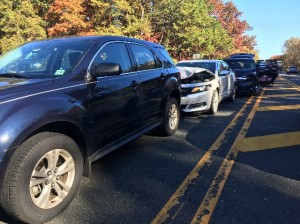 Assisting at the scene were members of the Manchester Volunteer First Aid Squad and members of Quality Medical Transport. The crash is being investigated by Ptl. Thomas O’Hare of the Department’s Traffic Safety Unit.