A nighttime head-on collision on Route 571 in the Ridgeway section of the Township sends two men to a local trauma center with serious injuries. 41-year-old Toms River resident, David M Rehl and 37-year-old Brick resident, Michael P. Redding were transported to Jersey Shore University Medical Center in Neptune for treatment of serious injuries after the vehicles they were operating collided head-on on Route 571 in the area of Ridgeway Boulevard. 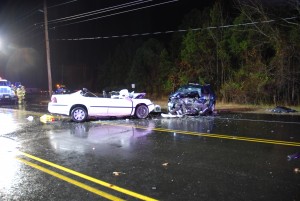 On Tuesday evening, December 6, 2016, at approximately 8:02 PM, officers from the Manchester Township Police Department responded to the area of County Route 571 and Ridgeway Boulevard to investigate a head-on collision involving two vehicles. Upon arrival, officers observed a white, 2004 Chevrolet Impala and a blue, 2001 Ford Escape in the eastbound lane of travel, each with heavy front-end damage. Additionally, it was discovered that the operator of the Impala, 41-year-old Thomas Rehl of Toms River, was trapped inside of the vehicle. He was soon after extricated by members of the Manchester and Ridgeway Volunteer Fire Departments who had arrived on scene to assist. The preliminary investigation revealed that Rehl, who was traveling westbound on Route 571 in the area of Ridgeway Boulevard, crossed over both the double yellow line and the center painted turn lane before colliding head-on with the Ford Escape being operated by 37-year-old Michael Redding of Brick in the eastbound lane. 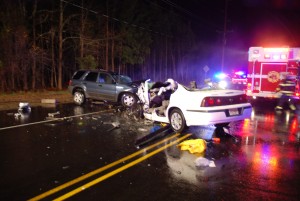 Both drivers were transported to Jersey Shore University Hospital, Neptune by ambulance for their injuries.  At the time of this release, Rehl was listed in serious condition with internal injuries, while Redding was listed in stable condition with injuries to his arms, legs and face. Both operators where wearing their seatbelts and both vehicles had multiple airbag deployment.

Also, assisting at the scene were members of the Manchester Volunteer First Aid Squad, EMS personnel from Quality Medical Transport, and Paramedics from MONOC. Additionally, detectives from the Ocean County Sheriff’s Office Crime Scene Investigations (CSI) Unit as well as detectives from the Ocean County Prosecutor’s Office assisted at the scene. The investigation into the cause of the crash is still ongoing and is being conducted by Corporal Douglas P. Higgins of the Manchester Township Police Traffic Safety Section with the assistance of the Ocean County Prosecutor’s Office.