Police are requesting the public’s assistance in locating a vehicle that fled the scene of a serious hit and run crash that occurred on Monday, July 11, 2016.

At approximately 9:57 p.m., on Monday, July 11th, officers from the Manchester Township Police responded to Commonwealth Boulevard at the intersection of Pemberton Street in the Pine Lake Park section of town to investigate a hit and run crash involving a motorcycle and an unknown vehicle. Upon arrival, officers observed a black, 2005 Honda Shadow motorcycle on its side in the west bound lane of Commonwealth Boulevard. The rider of the motorcycle, later identified as 20 year old, Noel M. LLera 3rd, of Manchester, was lying on the road in the intersection. The rider was reported to have initially lost consciousness but was awake and complaining of difficulty breathing and chest pain when officers arrived. The rider was transported to Community Medical Center in Toms River, evaluated and then transferred to Jersey Shore University Medical Center in Neptune. His current condition is not known. The other vehicle involved in the crash left the scene prior to police arrival according to witnesses. 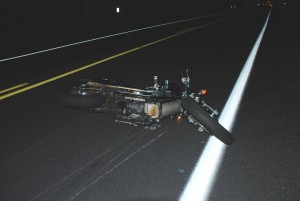 The initial investigation revealed that the LLera was traveling west on Commonwealth Boulevard approaching the intersection of Pemberton Street when he braked aggressively to avoid a collision. This caused his motorcycle to fall over and strike the roadway. After striking the roadway, the motorcycle then slid on its side and impacted the unknown vehicle in the intersection, possibly striking it on the driver’s side rear lower portion or on the undercarriage. The rider of the motorcycle was wearing a DOT approved helmet, gloves, and a padded riding jacket at the time of the crash. 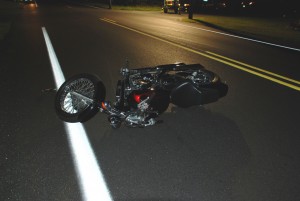 Assisting at the scene were members of the Manchester Township Volunteer First Aid Squad, The Ridgeway Fire Department, and the Ocean County Sheriff’s Department Crime Scene Investigation (CSI) Unit. The investigation into the crash is still ongoing and anyone with information is asked to contact Patrolman Antonio Ellis of the Manchester Township Police Department’s Traffic Safety Unit, at 732-657-2009 ext. 4401.