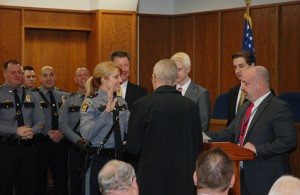 After taking her oath, Chief Parker thanked her family, friends, Chief Klimakowski, Mayor Palmer, and members of the Township Council, all of whom were attendance at the ceremony, for their continued support. Having served nearly 26 years in Manchester Township, Chief Parker expressed her gratitude for her fellow Officers.

“I am lucky to be their Chief. Thank you for sharing in all their success. Today is a great day for Manchester Township,” Chief Parker said. 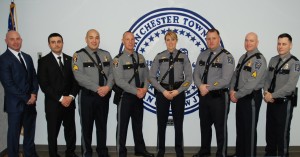 Mayor Palmer offered his congratulations to Chief Parker and all of the Officers receiving promotions in Manchester Township, which he said has the finest police department in the State of New Jersey.

“The true mark of leadership is creating new leaders. I look up at the dais today and know Manchester is in good hands,” Mayor Palmer said.

The following officers also were promoted during the Monday ceremony:

Lt. Todd Malland was promoted to the rank of Captain. He holds a Master’s degree from Fairleigh Dickinson University, graduated from the West Point Leadership and Command program and serves as Manchester’s Accreditation Manager.

Detective Albert Vega was promoted to the rank of Sergeant after serving in the Investigations Bureau for the past seven years. Sgt. Vega is a member of the Ocean County Regional SWAT team. He holds a master’s degree from Fairleigh Dickinson University and certifications in Advanced Homicide Investigations and Front Line Supervision.

Detective Christopher Hemhauser was promoted to the rank of Detective Sergeant. Dsg. Hemhauser served nine years as a Detective after working as a Patrolman and Civilian Dispatcher. He also served seven years as a member of the Ocean County Regional SWAT Team. Dsg. Hemhauser holds a bachelor’s degree from Stockton University.

Each promoted Officer thanked their family, colleagues, and Township administration for their support as they endured the challenging promotions process, which includes comprehensive written and oral examinations.

The Manchester Township Police also welcomed a new Patrolman. Special Law Enforcement Officer Class II Nicholas Greenwood, who joined the Police Division in December 2013 as a part-time Officer, was hired in a full-time role. Patrolman Greenwood holds a bachelor’s degree from East Stroudsburg University and graduated from the Police Academy in May of 2012.

Additionally, Patrolman Robert Maccaquano, who has 10 years police experience and holds an associates degree from Ocean County College and Patrolman David Fusaro, who has eight years police experience and holds a bachelor degree from Stockton University, were laterally transferred. Both joined the Investigations Bureau after completing a thorough interview process.