Man Injured in Crash After Being Ejected from Vehicle

Man Injured in Crash After Being Ejected from Vehicle

On Friday, June 24, 2016, at approximately 1:11 AM, members of the Manchester Township Police Department responded to the intersection of Route 571 and Seminole Street for the report of a multiple vehicle crash. Upon arrival, officers learned that it was a two vehicle crash involving a 2011 Nissan Altima and a 2001 Mazda Tribute. The Nissan was being operated by Joseph M. Diperi, 23, of Manalapan and the Mazda was being operated by Jevon I. Cotte, 24, of South Toms River. 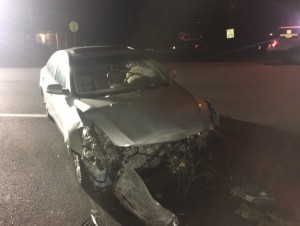 The investigation revealed that the Nissan was making a left turn from Seminole Street on to Route 571 when it collided with the Mazda, which was traveling eastbound on Route 571. The impact caused the Mazda to overturn. The operator, Cotte, who was not wearing his seatbelt at the time, was ejected through the sunroof.  Cotte sustained injuries and was transported via ambulance to Jersey Shore University Medical Center by MONOC Paramedics for treatment. The operator of the Nissan, Diperi, was wearing his seatbelt and was uninjured in the crash, however he was evaluated by Manchester First Aid as a precautionary measure. Diperi refused further medical treatment. Cotte is listed in stable condition at this time.

The Manchester Township Police Department would like to remind all operators of motor vehicles to drive safely and to always wear their seatbelts.