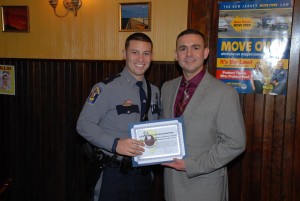 On Thursday, Dec. 11, 2014, the Ocean County Traffic Officers Association awarded Manchester Township Police Officer Michael Guarino with the Kimberly Smith-Ames DWI Certificate of Recognition for his unwavering commitment to keeping not only the residents of Manchester Township safe, but also those who pass through it by rigorously enforcing the DWI laws of the State of New Jersey.

Officer Guarino, who led the department in DWI arrests, is three-year veteran of the Manchester Township Police Department. Officer Guarino, who participated in several high visibility DWI enforcement campaigns throughout the year, was one of five officers from around Ocean County vying for the top honor of receiving the 9th Annual Kimberly Smith-Ames DWI Prevention Award. The award was created to honor the life and memory of Kimberly Smith-Ames who was tragically killed on October 7, 1998, by an extremely reckless drunk driver in Beachwood, NJ. The crash not only took the life of 23-year-old Kimberly, but of her unborn child as well. The award, which is issued annually, was created by her parents, Ed and Carol Smith. 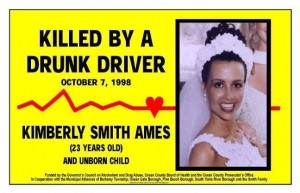 The purpose of this award is to increase the public’s awareness of the enormous commitment and determination put forward by the men and women of the Ocean County law enforcement community in educating and preventing Driving While Intoxicated offenses while acknowledging those officers who have demonstrated such commitment to this fight.