Third grade Manchester Township Elementary School students were taught the ins and outs of law enforcement and given important safety lessons from police officers during a Monday morning program.

The program at MTES came together after some of the female students in Miss Melissa Wettengel’s class asked whether a career in law enforcement was something they could pursue. In an effort to show the inclusiveness of the profession, Ms. Wettengel organized the program with the Manchester Township Police and Ocean County Sheriff’s Department, two organizations with accomplished female officers. During the planning stages, the program grew into an opportunity to give students a thorough view of law enforcement and safety through several hands-on lessons.

“Each interactive station was created to give students the opportunity to explore the equipment a Manchester Township Police officer uses on a daily basis,” said Captain Lisa Parker. “In addition, students were given information they can use to stay safe, whether they’re in a car with their parents or riding a bike throughout their neighborhood.” 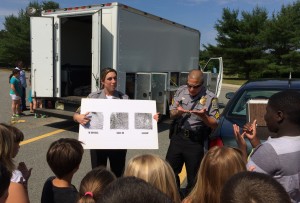 Sgt. Jaime Phillips and Sgt. Valerie Seiser of the Ocean County Sheriff’s Department spoke about their experiences as female officers in law enforcement. They also gave students a lesson in fingerprints and explained how they serve as unique identifiers. The officers told students the importance of properly securing their belongings, like bikes and other property, so that they do not fall victim to crimes of opportunity. 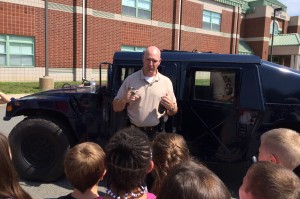 Manchester Township Police Detective Christopher Hemhauser showed off one of the department’s Humvees, which police rely upon primarily in disaster situations and off road rescue details. Students were able to sit inside of the vehicle and check out the equipment. Detective Hemhauser also spoke about his role as a police detective and taught children how to remain safe when they use the Internet. 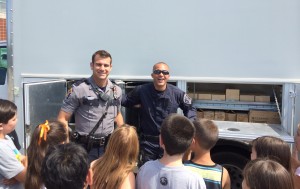 Manchester Township Police Officer Christian Nazario demonstrated the use of all of the SWAT equipment. He let the children hold the ballistic shields and watch as he showed them the reconnaissance robot used when a person barricades themselves in a dwelling. 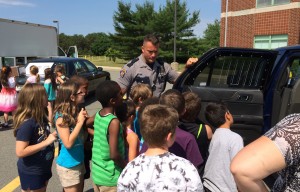 Police Officer Ian Bole went over all of the equipment found in a Manchester Township Police patrol vehicle. He allowed the kids to watch themselves on camera, sit in the police car and talk on the PA system. He also talked to the children about the importance of wearing their helmet while riding a bike and wearing a seat belt when in the car.

The children had a good time and the Officers enjoyed the break from their daily routine to spend time with the third graders. In addition to the lessons, students were given educational materials and coloring books to help reinforce what officers taught them. Manchester Township Police are proud to maintain a strong relationship with the School District; in May, fifth graders throughout the district celebrated their graduation from DARE, a comprehensive drug and violence prevention curriculum.