Manchester Township Police are searching for a man who displayed a handgun during a robbery at the Whiting CVS Pharmacy on Monday, Dec. 29. 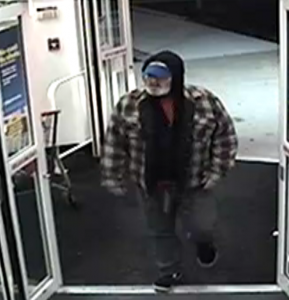 At approximately 5:30 p.m. that day, the suspect entered the CVS on Route 530 and Schoolhouse Rd. and walked up to the cashier, where he demanded money. The suspect pulled out of his jacket what appeared to be a black semi-automatic handgun and pointed it at the cashier when he was questioned about the money. When the cashier handed the suspect the cash, he exited the CVS and traveled by foot right on to Schoolhouse Road.

The suspect, whose image was captured on surveillance video, is described as a white male with a white/silver beard and darker-colored mustache. He was wearing a blue baseball cap, a dark hooded sweatshirt, dark pants, red shirt, and a plaid jacket. He is believed to weigh between 220 to 240 lbs. and is between 5’8” to 5’11” inches tall. 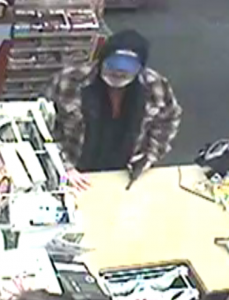 The robbery is under investigation by Manchester Township Police Detective Chris Hemhauser, Detective Craig Beaulieu and Patrolman Brian Volk. Also responding to the scene to assist with the investigation were the K-9 and CSI units from the Ocean County Sheriff’s Office. The victim was shaken up but did not sustain any injury during this incident.

Anyone with information about the robbery is urged to contact Manchester Township Police at 732-657-6111. Anonymous tips can be submitted by clicking the “Tip Line” link at www.ManchesterPoliceNJ.com.