Manchester Twp NJ – On 06/12/12 Manchester Township resident, John McGuire presented Manchester Police Chief, Brian Klimakowski with a certificate redeemable for the purchase of one bullet resistant vest. This presentation marks the third consecutive year that Mr. McGuire has personally purchased and presented such a certificate to the Manchester Police Department. In years past, Mr. McGuire has personally funded and donated equipment for the Police Department’s Honor Guard, and an ice water rescue suit. McGuire also contributes his time and efforts with assisting members of the Police Department with acquiring donations for the yearly Police Unity Tour as well as with many other PBA related events. Mr. McGuire stated, “I wish I could do more, but each year I like to do something.” 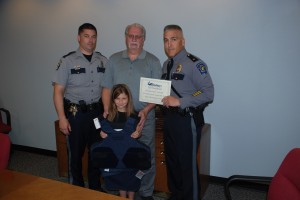 Accompanying Mr. McGuire at the presentation was his third grade grand-daughter Tess, a student in the Manchester Township School District. Tess recently presented a gift certificate redeemable for the purchase of a Canine Ballistic Vest to the Brick Township Police Department, as the Manchester Police Department does not have a police canine unit. The presentation took place at a 3rd and 4th grade class assembly held at Tess’ elementary school. When asked how she came up with the idea for the donation, she indicated that she “loves dogs” and added that her family has two of their own. Tess, with help from her mother made flyers relating to the fund raiser and distributed them throughout the area along with donation jars. Mr. McGuire stated that Tess was able to reach her goal of raising $717.00 in about one month. The donations were obtained from a multitude of donors including: fellow students, faculty members, Manchester Township employees, members of the Manchester PBA 246, her family as well as many other sources. Mr. McGuire stated that he is very proud of his grand-daughter’s accomplishment and added that she is a “great kid.”