During the blizzard this past weekend, the Manchester Township Police Department’s Communications Section answered hundreds of calls for service, ranging from first aid calls, to disabled or stuck vehicles to residents reporting storm-related damage and everything in between. Many do not realize that behind the scenes, the unseen first, first responders are prepared and standing by for calls coming in from the public for assistance. 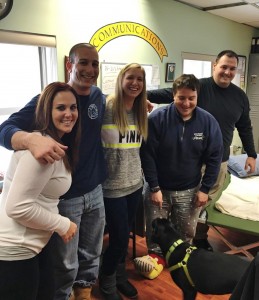 Prepared for the worst, Manchester Township’s Public Safety Telecommunicators, led by Supervisor Dom del Pino, camped out at Police Headquarters during the storm, some for the entire weekend. “We are an important part of the emergency response system and you cannot have someone fail to show for work because the roads are impassable. For this reason, we encouraged our team to stay at police headquarters instead of risking dangerous driving conditions,” said Supervisor del Pino.

During the storm, dispatchers were treated to homemade chili, snacks, hot cocoa, and a relaxed dress code. Additionally, cots were provided by the Office of Emergency Management.

Manchester Public Works assisted police, fire and medical personnel by clearing roads and shoveling so that stretchers and other emergency equipment could reach our residents. Manchester’s three fire departments also assisted First Aiders by shoveling and clearing snow so they and police officers could reach snowbound residence. “This was truly a group effort by all to assist every resident who was in need,” said Chief Lisa Parker.

Whether paid or volunteer, First Responders are never off duty. This is especially true during States of Emergency such as this past weekend’s storm. Many First Responders, from the firefighters, First Aiders, Deputy OEM Coordinator, and Police Officers, all pulled extra duty some even camped out at their respective headquarters waiting for calls from the public.