The Manchester Township Police is honored to highlight the philanthropic efforts of township resident John McGuire, who has dedicated time and resources to make his hometown a better place.

Mr. McGuire, a retired elevator mechanic who worked in New York City, began his decades of service assisting the Manchester Little League in the 1980’s, when he helped to secure better playing fields and snack bars for the organization. Since then, he has been actively involved with the Manchester Township Police, Police Athletic League, Municipal Alliance and school district. 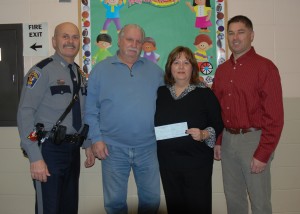 “John has been a pillar of the community for more than 20 years. He’s always looking for ways to help out, whether that means offering his time to mentor children or donating funds to help purchase equipment that keeps our police officers safe,” said Chief Lisa Parker.

Though he commuted from Manchester to New York City for many years, Mr. McGuire has always enjoyed living in Manchester and never thought about moving closer to his job. The Manchester Township Police and PBA 246 are grateful for Mr. McGuire’s past nine years committed and selfless service as well as his many donations, which include several bullet resistant vests, a wet suit, a bugle for the Police Honor Guard, and countless supplies used to aid law enforcement riders during the annual Police Unity Tour.

“Whatever I could do, I’d try to do. I feel good when I go home at the end of the day after doing something for the community,” Mr. McGuire said.

Additionally, Mr. McGuire helps PBA 246 with the organization’s annual Golf Outing, which is scheduled this year for May 4th, and gives his time to the annual Penguin Plunge which raises money for the Regional Day School. Mr. McGuire also founded a scholarship to benefit a high school senior in memory of his late son and serves as a mentor to three students at Manchester Township Elementary School.

“I just love working with kids. If you want to stay young, work with the kindergarteners to fifth graders,” Mr. McGuire said.

Mr. McGuire’s granddaughter, Tess, a 6th grade student at Manchester Middle School has followed his lead and has been active in the community. Before the Manchester Township Police formed its K-9 unit this past January, Tess, a dog lover, worked to raise funds to purchase a vest for Brick Township’s police dog. She also worked to raise $500 for the Wounded Warrior Project.

“John is a great guy who does whatever he can for not only the Manchester Township Police and PBA 246, but for the township and especially the children. He’s very humble and will never seek out recognition for his good deeds. Without his support, many important programs wouldn’t thrive as they do today,” said PBA 246 President Paul Bachovchin, who has worked closely with Mr. McGuire for many years.