The Manchester Township Police is proud to announce that its officers were among those who contributed to the more than $440,000 raised for the Special Olympics of New Jersey during the 2015 “Snow Bowl” flag football tournament. 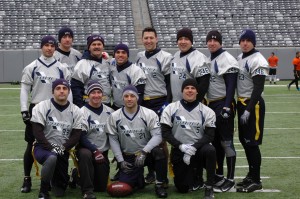 Manchester’s officers and sponsor, Thompson Chiropractic of Ocean County, donated $2,230 to the effort. Teams were required to raise a minimum contribution of $2,000 to participate in the annual event held at MetLife Stadium, home of the New York Giants. 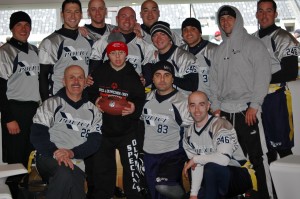 Teams were made up of law enforcement and firefighters personnel from throughout the state. Though Manchester’s team had a record of 2-1 and did not make the tournament’s playoffs, the players were happy to participate and give their time to a good cause.

Since its inception eight years ago, Snow Bowl has raised more than $1,300,000 for Special Olympics New Jersey. The success of this event directly helps more than 24,000 athletes train and compete free-of-charge, year-round, in 24 Olympic-type sports, according to the Special Olympics of New Jersey.