On Thursday morning, September 15th, westbound lanes of Route 37 near the intersection of Colonial Drive were closed due to a motor vehicle crash involving two vehicles. 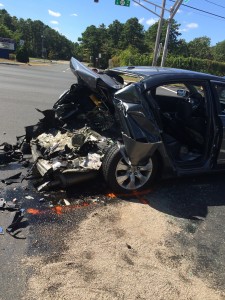 At approximately 11:38 a.m., officers from the Manchester Township Police Department responded to the intersection of State Highway 37 and Colonial Drive for the report of a motor vehicle crash involving two vehicles. Upon arrival, officers located a, 2003 Infiniti SUV with front end damage and a 2009 Honda Accord with rear end damage in the intersection.

The initial investigation revealed that the driver of the Infiniti, 58-year-old, Clarissa Holland of Whiting, was travelling westbound on Route 37 when she crashed into the rear of the Honda which was stopped in front of her for a yellow light. The impact caused both vehicles to enter the intersection of Colonial Drive. The Honda, which was being driven by 78-year-old, Rita Jones, of Berkeley Township, was occupied by two other people; front seat passenger, Lena Ilg, age 83, and rear seat passenger, Rose Hidi, age 79, both from Berkeley Township. 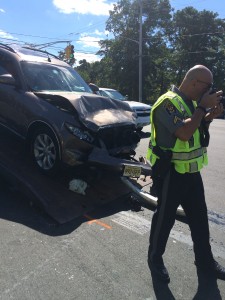 All three occupants of the Honda, including Hidi, who had to be extricated by members of the Manchester and Ridgeway Volunteer Fire Companies were transported to Community Medical Center by ambulances from Quality Medical Transport. Ms. Holland was transported to Community Medical Center by the Manchester Volunteer First Aid Squad for treatment of non-life threatening injuries, specifically abrasions caused by her seatbelt as well as air bag deployment. This crash is under investigation by Ptl. George Smith of the Patrol Bureau.