During the initial investigation, it was determined that the operator of the Ford F-150, 31 year old, Glenn Disman Jr. of Jackson was travelling westbound on Route 37 when he failed to obey the red traffic signal and crashed into the Honda Civic which was traveling across the highway onto Bone Hill Road.  The Honda Civic was being operated by 26 year old, Christopher Williams, of Manchester and was occupied by two male juveniles, ages 14 and 15, at the time of the crash. 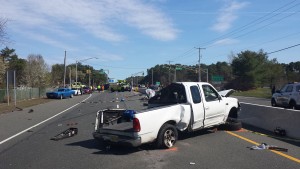 As result of the collision, Disman’s vehicle crashed into a traffic signal light pole, dislodging it from its base before rolling over several times and coming to rest in the westbound fast lane. Disman suffered numerous lacerations and was transported by ambulance to Jersey Shore University Medical Center in Neptune. His current condition is not known. Williams and his two juvenile passengers were transported by ambulance to Community Medical Center for minor injuries.

The road was closed for approximately two hours while the investigation was taking place and the scene was being cleaned up.  Assisting at the scene were members of both the Manchester and Ridgeway Volunteer Fire Departments, as well as members of the Manchester Volunteer First Aid and Quality Medical Transport. Also assisting were paramedics from MON-OC and representatives from the NJ State Department of Transportation. The crash is under investigation by Ptl. Ryan Saul of the Patrol Bureau.