On the afternoon of Saturday, November 7, 2015, members of the Manchester Township Police Department responded to the intersection of State Highway 37 and Colonial Drive for the report of a motor vehicle accident involving a pickup truck and an ambulance. Upon arrival, officers located a grey Chevrolet Silverado in the eastbound lanes of Route 37 with extensive front end damage and a Ford E-Series ambulance, owned by Quality Medical Transport of Bayville, lying on its driver’s side just east of the intersection on Route 37. 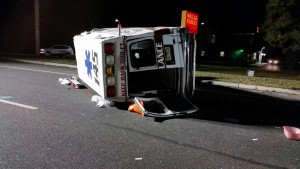 The initial investigation revealed that the ambulance, which had been transporting a patient to Community Medical Center in Toms River, was traveling eastbound on Route 37, when it collided with a 2015 Chevy Silverado Pickup that was traveling south on Colonial Drive, crossing Route 37. Both the driver of the ambulance, 25 year old, Jennifer Garelick of Barnegat, and the rear passenger, 22 year old, Nicole Christiano of Toms River, were airlifted to Jersey Shore University Medical Center in Neptune. Additionally, the on-board patient, 73 year old, Marie Hilton of Whiting, was transported to Jersey Shore by ambulance.  The driver of the Chevy Silverado, 40 year old, Dajuan Smith, of Toms River, sustained minor injuries and refused additional medical attention at the scene.

Assisting at the scene were members of the Ocean County Sheriff’s Office Crime Scene Investigation (CSI) Unit and the Ocean County Prosecutors’ Vehicular Homicide Unit, as well as members of the Manchester Volunteer First Aid Squad, and both the Manchester and Ridgeway Volunteer Fire Departments. Traffic diversion was provided by the New Jersey State DOT Incident Management Emergency Response Team while the investigation was being conducted. The crash remains under investigation at by Ptl. Michael Anderson, Ptl. Ian Bole, and Ptl. Antonio Ellis of the Manchester Township Police Department’s Traffic Safety Unit. Anyone with information about this crash is asked to contact the Manchester Traffic Safety Section at 732-657-2009 Ext. 4401. 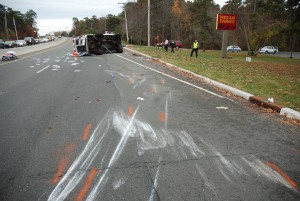