At approximately 7:15 p.m. on Friday, May 29, 2015, officers responded to the report of a motor vehicle accident on Commonwealth Boulevard in the Pine Lake Park section of Manchester Township. Upon arrival, it was determined that the accident involved a 2004, Toyota Highlander and a 1998, Harley Davidson motorcycle. 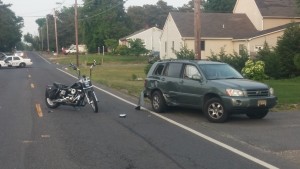 Preliminary investigation revealed that the crash occurred when the Toyota Highlander, which was being operated by Darren Bari, age 23, of Manchester, attempted to make a left turn into a driveway of a residence while the Harley Davidson motorcycle which was being operated by Paul Bogaski, age 49, of Bristol, PA., was approaching from the opposite direction. Mr. Bari was travelling west and Mr. Bogaski was travelling east at the time of the crash.

Mr. Bogaski was treated at the scene by Manchester First Aid and Paramedics from MONOC for injuries sustained as a result of the crash. He was airlifted to Jersey Shore Medical Center by MONOC helicopter for further treatment of his injuries. Mr. Bogaski was wearing a DOT approved helmet at the time of the crash. Mr. Bari did not report any injuries and refused medical treatment at the scene.

The roadway was closed for a period of time between Burnside and Pemberton Streets while the crash was being investigated. Also assisting at the scene were the Ocean County Sheriff’s Offices’ CSI Unit, the Ocean County Prosecutor’s Office, both the Manchester and Ridgeway Volunteer Fire Departments and Corecare EMS. The crash is being investigated by Ptl. Paul Bachovchin of the Traffic Safety Section.