On Dec. 14, 2014, at approximately 11:02 a.m., a black 2012 Harley Davidson motorcycle was traveling northbound in the asphalt parking lot in front if the Manchester Township High School located on 101 South Colonial Road. 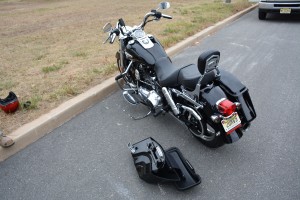 The operator of the motorcycle, 60 year old Anthony F. Spatola of Toms River, was practicing motorcycle riding maneuvers when he suddenly lost control and collided into a curb causing him to be ejected from the motorcycle. The motorcycle landed on top of Mr. Spatola, briefly trapping him until a witness assisted with up righting the motorcycle. Mr. Spatola was riding alone at the time of the collision and sustained significant injuries to his mouth and rib cage.  He was transported to Community Medical Center for his injuries by the Manchester First Aid Squad.

Assisting at the scene were the MONOC Paramedics. The crash remains under investigation by Patrolman Ian Bole from the Manchester Township Traffic Safety Unit.