On Sunday, March 27, 2016, officers from the Manchester Township Police responded to a motor vehicle crash involving an overturned vehicle on Route 530 near the intersection of Lacey Road in the Whiting section of town. Upon arrival, officers learned that a 1993, Buick Park Avenue, which had been travelling eastbound, was attempting to make a left hand turn from Route 530 onto Lacey Road when it collided with a 1998 Dodge Neon which was travelling westbound. After the impact, the Park Avenue overturned and landed on its roof in the right lane of travel on Lacey Road. 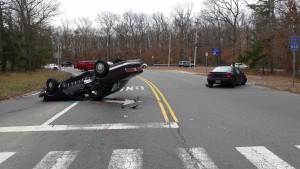 The driver of the Buick Park Avenue, 19 year old, Echo Jicha of New Egypt, was initially trapped inside of her vehicle but was assisted out of the front drivers side window by an unidentified motorist prior to the arrival of the police and fire departments. She sustained lacerations to her hand as well as possible internal injuries and was transported by ambulance to Community Medical Center in Toms River for treatment of those injuries, which were determined to be non-life threatening. The driver of the Dodge Neon, 28 year old Tyra Russell of Burlington City, was uninjured. She was, however, issued summons for operating her vehicle without a valid driver’s license and for having her driving privileges suspended at the time of the collision.

The roadway was closed and traffic was detoured during the investigation. Assisting at the scene were members from the Whiting Volunteer Fire Department and Quality Medical Transport. This crash is under investigation by Patrolman Ian Bole of the Manchester Police Traffic Safety Unit.