On Friday, April 17, 2015, at approximately 1:50 p.m., a green 2007 Hyundai Tucson collided with another vehicle and overturned on Route 70 in the Whiting Section of Manchester Township sending one driver to the hospital. 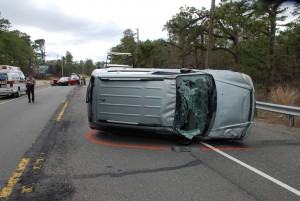 The Hyundai which was being operated by 67 year old Leslie J. Malsbury of Whiting was travelling east bound on State Highway 70 when it was struck by red 2008 Chrysler Concord being operated by 75 year old Norma Vasquez of Barnegat. The initial investigation reveals that Ms. Vasquez was stopped on the east bound shoulder of Route 70 using her cell phone prior to the crash and when she pulled back onto the travel portion of the roadway, she struck the Hyundai as it drove past. The impact occurred in the east bound lane and the collision caused the Hyundai to overturn onto its passenger side and then roll onto its driver side coming to rest in the west bound lane.

Ms. Malsbury was wearing her seatbelt at the time of the crash and only suffered a hand injury. She refused medical care. Ms. Vasquez was also wearing her seatbelt, but reported neck pain and was transported by ambulance to Kimball Medical Center, in Lakewood. The roadway was temporarily closed during the investigation by the Whiting Volunteer Fire Department. The crash is currently under investigation by Ptl. A. Ellis Traffic Safety Section.