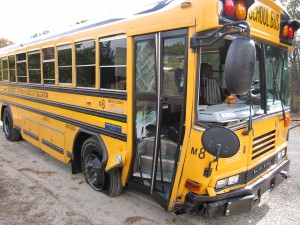 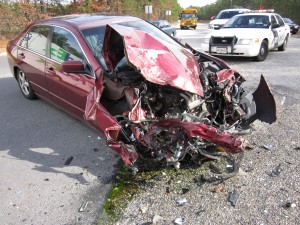 On Friday, November 16, 2012 at approximately 11.37 am, a 2003 Honda Accord, color red, collided with a Manchester Township Board of Education school bus at the entrance to the Manchester Township High School located at 101 South Colonial Drive in Manchester Township. The school bus was carrying children to the Manchester High School at the time of the crash. The driver of the Honda, a 17 year old female from the Pine Lake Park section of the Township, had just dropped off her younger brother at the school and was exiting the driveway onto South Colonial Drive when the crash occurred. The school bus, a 2007 Bluebird, color yellow, was being operated by Kathleen White, 59, from Whiting. Mrs. White is a Manchester Board of Education employee. There were 3 children on the school bus who were transported to Community Medical Center in Toms River for complaints of pain. The remaining children were examined by the School Nurses and transported by another bus to the High School. The 17 year old driver of the Honda was also treated at community Medical Center for a complaint of head pain. The driver of the Honda was seat belted at the time of the crash and there was air bag deployment. Both vehicles were significantly damaged and had to be towed from the scene. The cause of the crash is under investigation by Patrolman Antonio Ellis of the Manchester Police Traffic Safety Bureau. Assisting at the scene were members of Quality Medical Transport and members of the Manchester Volunteer First Aid.