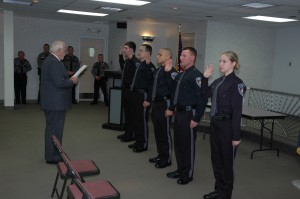 On March 27th 2013, five new volunteer recruits of the Manchester Township Auxiliary Police Unit were sworn in as Auxiliary Police Officers by Mayor Michael Fressola.  Manchester Police Chief Brian Klimakowski and other Manchester police officers along with friends and family of the five graduates were present for the ceremony.

The graduation marks the completion of their training which began on February 17th and concluded on March 24th of this year.  The officers completed approximately 50 hours of training and will begin field training by current Auxiliary Police officers. The State of NJ requires only 36 hours of training for auxiliary officers, however, these officers far exceeded the State minimum requirement.

The addition of these new auxiliary officers brings the total number of officers in the unit to 12.  The volunteer arm of the police department assists with non-enforcement type activities such as crowd control at events, courtroom security and general uniformed patrols throughout the Township.  Additionally, the unit is activated to assist the Manchester Police during severe weather and declared State of Emergencies. Many of Manchester’s Auxiliary Officers were honored for their service during Hurricane Sandy recently at a Township Council meeting.

This is the second time in the history of the Manchester Township Police that a basic auxiliary police academy has been conducted in-house.  In the past, Manchester recruits who were selected for auxiliary police training were sent elsewhere to complete the training academy.  Chief Brian Klimakowski, who has been a strong advocate of the Auxiliary Police Unit, has provided the resources for the department to host its own academy.

The selection process and standards to become an auxiliary officer are similar to that of a regular police officer.  The process for these five auxiliary officers began in October of 2012 when applications were made available to the public. The candidates passed a rigorous background check as well. Approximately17 applications were submitted and only five candidates were accepted into the training academy.  All auxiliary officers are held to the highest standards consistent with that of the Manchester Township Police.

The five new Auxiliary Officers are: