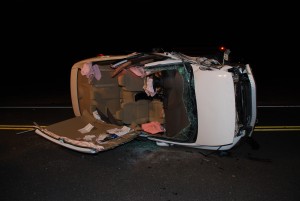 On Thursday, December 26, 2013 at approximately 5:25 pm, a 2007 Honda Civic, was traveling west on County Route 530 in the Whiting section of Manchester Township when the vehicle left it’s travel lane and impacted a tree on the east bound shoulder of the roadway in the area of America’s Keswick. The driver of the vehicle, 63 year old Edward Romaine of Whiting, was traveling alone at the time of the crash. The vehicle overturned after striking the tree and came to rest on its’ passenger side in the middle of the roadway. The driver was not wearing his seatbelt at the time of the crash and sustained a head injury which required him to be transported to Jersey Shore University Hospital in Neptune NJ by Medivac Helicopter. The vehicle was disabled as a result of the crash and was towed from the scene. Assisting at the scene were Members of the Whiting Volunteer Fire Department, MONOC Paramedics, MONOC 1 air transport, and Quality Medical Ambulance Service. The roadway was closed into Berkeley Township for two hours as a result of the crash. This crash is under investigation by Patrolman Antonio Ellis of the Manchester Traffic Safety Section.

Manchester Township Police would like to remind all drivers and passengers of automobiles to wear their seatbelts every time they travel and in all seating positions in the vehicle.