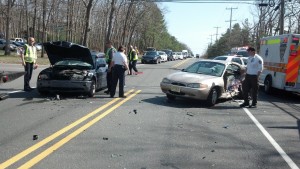 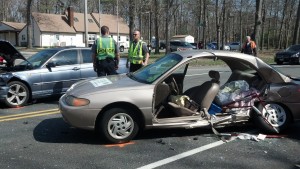 At 09:48 hours on April 16, 2013, a two vehicle crash occurred on NJ Route 70, at the intersection of Wilbur Avenue.  A 1998 Ford Escort, being operated by Ana Gil (age 30) of Brick, NJ was stopped at the stop sign on Wilbur Avenue. Gil entered the intersection and was impacted on the driver’s side by a 2005 BMW 300xi, being operated west bound on NJ Route 70 by April Cardell (age 30) of Lakehurst, NJ.  The impact forced Gil’s vehicle to rotate counterclockwise and came to final rest in the east bound lane of NJ Route 70.

Assisting at the scene were, Manchester Vol. Fire Dept., Quality First Aid, and MONOC Paramedics.  The crash is under investigation by Ptl. Douglas Higgins of the Manchester Traffic Safety Section.