SUV Overturns Into Stream with Three Adults and Two Children

SUV Overturns Into Stream with Three Adults and Two Children

On Sunday, July 12, 2015, at approximately 2:34 p.m., members of the Manchester Township Police responded to Route 547 in the Ridgeway Section of town to investigate a motor vehicle accident involving an overturned vehicle. Upon arrival, officers observed a silver 2004 Jeep Cherokee on its roof in a stream on the northbound side of the roadway.

The investigation revealed that the Jeep was traveling south on Route 547, when it abruptly crossed the centerline of the roadway and entered into the northbound lane prior to striking the guard rail and rolling over. The vehicle then went down an embankment and landed on its roof in a stream. 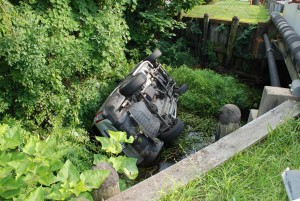 The vehicle was occupied by a total of five (5) passengers all from Queens, New York; 3 adults and 2 children. The driver of the vehicle, identified as 22 year old, Dulce Casique was transported via ambulance to Jersey Shore University Hospital in Neptune for treatment and evaluation of non-life-threatening injuries. The front seat passenger identified as, 33 year old, Pedro Rivera, suffered a head laceration and was flown to Jersey Shore by medivac helicopter where he was listed in stable condition. The rear seat passengers which included a 1 year old male, a 7 year old female, and a 42 year old female identified as, Marcela Hernandez, were also transported via ambulance to Jersey Shore for treatment of non-life-threatening injuries.

The roadway was partially closed for several hours during the rescue and cleanup. The children were released from the hospital last evening, while the status of the driver and rear seat passenger are not currently known. 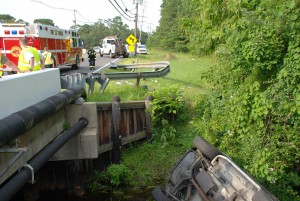 The investigation into the crash is still ongoing, but at this point, speed and driver error appear to be contributing factors. This crash is being investigated by Patrolman Antonio Ellis, Patrolman Michael Lynch and Patrolman Joseph Fastige of the Manchester Township Police Traffic Safety Unit.