Manchester Township and Police Department officials are proud to recognize the money-saving efforts of our Emergency Responders, most notably the Ridgeway Volunteer Fire Company for their recent success in securing more than three quarters of a million dollars in federal grant funding.

While attending a New Jersey League of Municipalities seminar on grant funding for disasters, Township Emergency Management Coordinator, Arthur Abline, learned that 87 percent of agencies that apply for FEMA’s Assistance for Firefighter Grant do not get awarded any money. Despite the dauntingly high percentage of rejected grant applications, the Ridgeway Fire Company has had two consecutive years in which they were awarded funding. The total monies awarded to them totaled more than $750,000, which included money used to purchase a new fire truck. 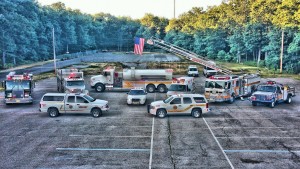 “The officials at Ridgeway Fire Company, led by Chief Michael Trimarchi, should be proud of their efforts in securing crucial funding through the Assistance for Firefighter Grant program. Their decision to retain the services of a top-notch grant writing firm to assist them with the process has benefitted both the residents of the Township and the emergency responders from Ridgeway Fire Company,” said Chief of Police and Director of Public Safety, Lisa Parker. “I would like to congratulate the fire company and their grant writer for their professionalism in securing this important grant funding.”

According to Coordinator Abline, the first step in securing a grant under this program is the electronic scanning of the submission. During the scanning process, documents are strictly reviewed by a computer and any part of the grant paperwork that is not correctly filled out or is missing information results in an automatic rejection. After this strict and highly critical review, only 13 percent of all submitted grants get funded. As for fire trucks, less than 2 percent of all such grant requests are funded.

“On behalf of Manchester Township, we are incredibly thankful for Ridgeway Fire Company’s dedicated service and initiative. Their efforts have saved the town almost $800,000 in the last two years,” said Mayor Kenneth Palmer. “We cannot thank them enough for their strong commitment to saving the tax payers of Manchester money.”