On Tuesday, June 30, 2015, at approximately 3:37 p.m., a blue 2006 Kenworth Dump Truck was traveling southbound on County Route 539 near Harry Wright Boulevard when it attempted to slow down for a vehicle turning ahead and lost control. The Dump Truck then left the roadway and collided with a light pole, sliding approximately 340 feet before coming to rest on the southbound shoulder of County Route 539. 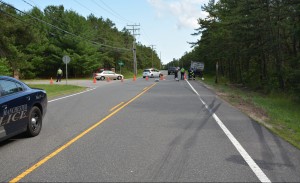 The driver of the Kenworth Dump Truck, 22 year old Abraham Alzuguren, was properly restrained and did not suffer any injuries as a result of the collision. Assisting at the scene were: Whiting Volunteer Fire Department and Jersey Central Power and Light.