Two Vehicle Crash: Driver and occupant in the same vehicle were killed

Two Vehicle Crash: Driver and occupant in the same vehicle were killed 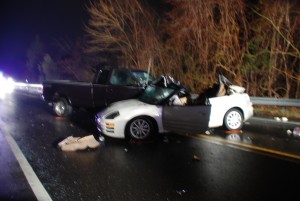 On Sunday March 31, 2013 at approximately 6:15 pm, a white 2002 Mitsubishi Eclipse convertible was traveling south on County Route 547, near the commercial gate to Joint Base McGuire-Dix-Lakehurst, when it crossed into the north bound lane and impacted a black 2000 Ford F150 pickup that was heading northbound on County Route 547 in the Ridgeway section of Manchester Township.  The driver and passenger in the Eclipse, Brandon Simms, an 18 year old from Leesville Road in Jackson and a 17 year old male juvenile from Jackson were both pronounced dead at the scene. Both the driver and the passenger of the Eclipse were unrestrained at the time of the crash. The driver of the Ford pickup, Stanley A. Lellig, a 46 year old from Howell, was properly restrained at the time of the collision. He was transported to Kimball Medical Center in Lakewood where he was treated for non-life threatening injuries to his chest and later released. There are no charges filed against Mr. Lellig at this time.

The cause of the crash is undetermined and still under investigation by members of the Traffic Safety Bureau and Ocean County Prosecutor’s Office.