On Thursday, March 12, 2015, at approximately 1:30 a.m., members of the Manchester Township Police were dispatched to a rural portion of State Highway 70 near milepost 35 for the report of an accident in which a vehicle left the roadway and drove down an embankment in the woods. 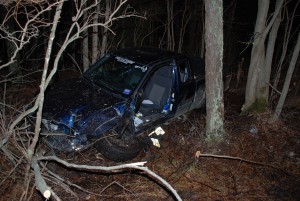 Upon arrival, police discovered a 2007 GMC pickup off the roadway and in the woods on the eastbound side of Route 70. Behind the wheel of the vehicle was an unresponsive male who was in and out of consciousness. The initial investigation revealed that the vehicle was travelling eastbound on Route 70 when it left the roadway and struck a guardrail and several trees before traveling down an embankment into a marsh.

The driver, later identified as 35 year old Jeffrey Byrne, of Browns Mills, was transported to Community Medical Center in Toms River for a Medical Emergency. He was later listed in stable condition with no broken bones or internal injuries. Assisting at the crash scene were Paramedics from MONOC, Quality Medical Transport, and volunteers from the Whiting Volunteer Fire Department. The crash is being investigated by Patrolman Antonio Ellis of the Manchester Township Police Traffic Safety Section.