A late night single vehicle crash on Route 530 in Whiting sends a Manchester teenager to Jersey Shore University Medical Center with serious injuries. The initial investigation suggests that the driver, and lone occupant of the vehicle, may have fallen asleep before leaving the roadway and crashing into a tree. 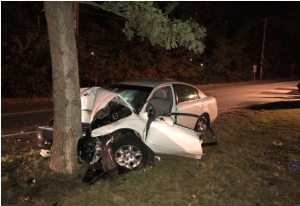 On Friday evening, September 23, 2016, at approximately 10:52 p.m., officers from the Manchester Township Police Department responded to Route 530 near the intersection of St. John Place in the Whiting section of Manchester to investigate a single vehicle crash involving a vehicle which had struck a tree. Upon arrival, officers observed a white, 2006, Nissan Altima which had struck a large tree head-on on the eastbound side of the roadway. Based on the investigation and a witness statement, the vehicle was traveling westbound on CR530 and began to drift over the center line into the oncoming lane of travel. The vehicle then continued onto the eastbound shoulder, eventually leaving the roadway and striking a tree. The vehicle was being operated by a 17 year old Manchester female, who was the sole occupant. The driver was transported by medivac helicopter to Jersey Shore University Medical Center where she is currently listed in critical condition. The cause of the crash is under investigation, but at this point, it appears that the driver may have fallen asleep behind the wheel. The driver was wearing her seatbelt at the time of the crash.

Assisting on scene were first aid members from Quality Medical Transport, paramedics from MONOC and firefighters from Whiting Volunteer Fire Department. This crash is being investigated by Patrolman Michael Anderson of the Manchester Township Police Department’s Traffic Safety Unit.