On Monday, April 25, 2016, at approximately 5:37 p.m., officers from the Manchester Township Police Department responded to the area of Route 70 and Roosevelt City Road for the report of a single vehicle crash involving a pickup truck which had left the roadway and was in the woods.

Upon arrival, officers learned that a red, 1999, Dodge Dakota pickup, was traveling west on Route 70 when the driver, identified as 57 year old, Michael Valladares of Little Egg Harbor, suffered a medical emergency which caused him to lose control of his vehicle. As a result, Valladares’s vehicle crossed the centerline, left the roadway and crashed into a telephone pole and several trees on the eastbound shoulder. Valladares was travelling alone at the time of the crash and was properly restrained with his safety belt. No other vehicles were involved. 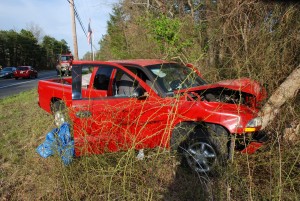 Valladares was transported by Medivac Helicopter to Jersey Shore University Medical Center in Neptune for treatment of injuries sustained in the crash and his current condition is unknown. Assisting at the scene were members from Quality Medical Transport and the Whiting Volunteer Fire Department as well as Paramedics from MONOC. This crash is being investigated by Patrolman Vincent DeRome of the Patrol Bureau with the assistance of Patrolman Antonio Ellis of the Traffic Safety Unit.