Summit Park resident and United States Army Sergeant Major, Harrington Henry was welcomed home by officers of the Manchester Township Police on May 5, 2016. Several uniformed officers, led by Chief Lisa Parker and members of the department’s Command Staff, escorted Sgt. Major Henry and his wife, Kristy from the township border on Route 70 to his residence in Summit Park. Once there, Henry was greeted and welcomed with handshakes, hugs and applause as a sign of appreciation for his committed service to this country. Henry, a Sergeant Major with the 77th Sustainment Brigade stationed out of Fort Dix was deployed in Iraq for the last 9 months. His mission during his deployment was to advise and assist the Iraqi Army in their logistical efforts to defeat ISIS. 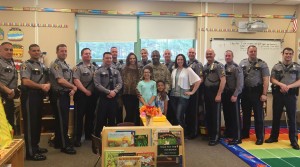 After a brief stop at his residence, Henry was escorted to the Manchester Township High School to surprise his daughter Amaris Butler, a 16 year old sophomore. At the school, officers entered Amaris’ classroom advising the unsuspecting students of their intention to give a safety presentation. Once inside the room, Henry entered last surprising his daughter, who was overcome with emotion. The reunion with his eldest daughter was followed by two additional reunions when Henry was escorted to Manchester Township Elementary School to surprise his daughter, Loghan, a 4th grader and his son, Aaron, a kindergartener at the school. In both cases, officers from the Manchester Township Police Department entered to the classroom first to divert the children’s attention, while Henry came in last to surprise them. 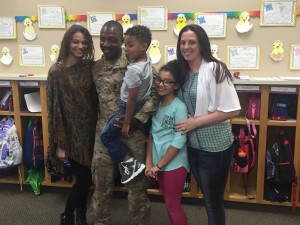 “This was an excellent opportunity for the Manchester Township Police to show their support for the men and women of the United States Military and the sacrifices that they make every day. It was a true honor to be able to welcome Sgt. Major Henry home today”, said Chief Lisa. D. Parker.

While deployed and away from his family, his wife Kristy, like so many other spouses of America’s brave servicemen and women, was home tending to family on the home front. Unlike most other spouses, however, Kristy had to endure a two month tumultuous time period, wherein her neighbor’s house was shot at multiple times in the fall of 2015. Despite being fearful for not only her safety but for that of her children, making them sleep on the floor behind concrete walls for protection, Kristy, a brave and strong person in her own right, successfully started a neighborhood watch program within the development under the guidance of Det. Sgt. Chris Hemhauser. Kristy was instrumental in organizing local residents within her neighborhood to come together as a means of looking after each other as well as providing additional eyes and ears for the police department. Their assistance coupled with the tenacity of several Manchester Police detectives led to the arrest of numerous individuals. Although the problem has long since been removed from the neighborhood, Kristy continues to lead the neighborhood watch program. “It is apparent that bravery and commitment to service runs strong in this family”, said Parker.