On Monday, July 21, 2015, at approximately 7:34 a.m., members of the Manchester Township Police responded to the area of Ridgeway Boulevard and Ridge Avenue for the report of an overturned vehicle. Upon arrival, officers located a blue, 2014, Chevrolet Malibu on its side in the middle of the roadway. 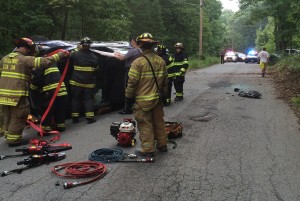 The preliminary investigation determined that the vehicle was traveling west on Ridge Avenue when it left the roadway, struck a small bush, climbed an embankment, and impacted a large tree. After impact, the vehicle overturned, coming to final rest on its driver’s side in the middle of Ridge Avenue.

The driver of the vehicle was identified as 80 year old Kathleen Hayes-Horohoe, from Bradenton, Florida. Ms. Hayes-Horohoe, had to be extricated from her vehicle, after which she was treated at the scene for chest pain and transported by ambulance to Jersey Shore University Hospital in Neptune by the Manchester Volunteer First Aid. She is currently listed in stable condition. 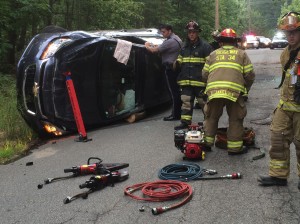 The roadway was closed for several hours during the rescue and cleanup. A large tree had to be taken down by Manchester Township Public Works to prevent it from falling and striking electrical wires in the area. Normal traffic flow was restored around 9:30 a.m.